NOW STREAMING 5 NIGHTS A WEEK!
I'm making a push to being granted affiliate status. This would allow me to implement all kinds of perks on my streams like points you earn just by viewing that you can spend on drawing request or making me sing! I could also start making money which I really need right now.
I need 50 followers, so if you have a Twitch I'd really appreciate a follow!
Click the nonsense below
javascript:nicTemp(); In 2008 I drew my friend Tiffany having her bra stolen by my mascot character, Hippo the Penguin. I should have asked first (and would always do so going forward) but luckily she loved it. Then another friend asked for a drawing of her like that as well. Before I knew it, I had a series on my hands.

In college the idea of drawing women openly in a revealing manner was scary. I thought I'd be looked at as creepy or perverted. But incorporating a cute penguin made it ok somehow. It added a touch of comedy to each piece and echoed the "pervy but funny" vibe a lot of us had grown up with in anime.

But now that I'm in my 30s things have reversed. The idea that I would be drawing artistic nudes is to be expected. It's seen as an important part of an artist's field of study. Throwing in a penguin to steal underwear, however, almost adds an air of perversion. As if the piece is trying to tap into some unique fetish. That's how it feels to me atleast.

Either way, now that I've drawn over 50 girls, I figured I had reached a good stopping point. But I wanted to give the series a proper ending. It took me almost all of 2019, but I managed to draw almost all of the 50 Naughty Hippo girls again. All those that consented to being drawn again, anyway.

It seems Hippo has finally learned his lesson, and returned all that he has stolen. So all that me and him have left to say is:

Here is the main drawing and speed sketches from last night’s St. Jude Charity Stream. We raised $150! Thank you so much for everyone who watched and donated! GO TO tiltify.com/events/speedsketches TO DONATE

You can donate to request drawings live and even get me to sing to you! (I can sing some songs OK. Most I cannot sing well at all. Enjoy.)
This will be at Twitch.tv/Yeager_Comics

But to donate go to tiltify.com/events/speedsketches (which also has all the details)

You can even donate RIGHT NOW and I'll get to your request at the very beginning of the stream! 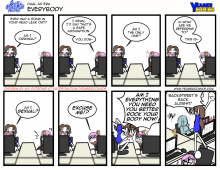 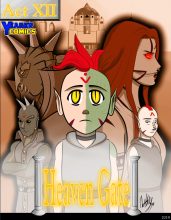 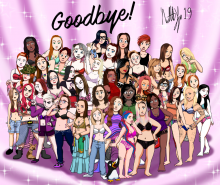